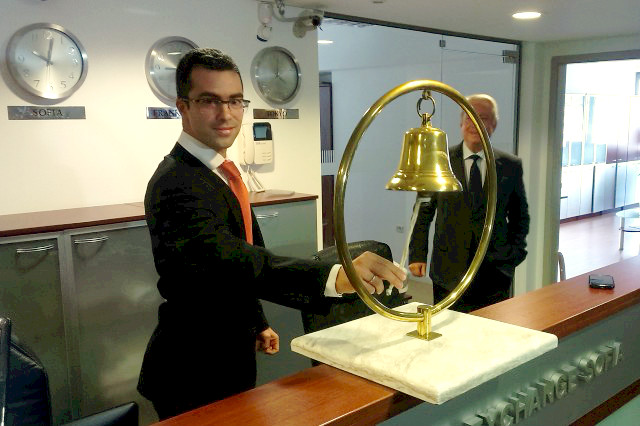 The consumer-credit company Credissimo AD began trading today on the BSE. It became the first non-banking financial institution on the BSE. The owners offered a small package of shares with the potential to increase the offer should interest be high.

The purpose of the listing is not to increase capital, but a first step towards the search of a strategic partner, which is part of a 3-year expansion strategy. The idea of the managers is to achieve a global reach, while pursuing a 3-digit growth in the next several years.

The issue is BGN 2.5m and the shares have a nominal value of BGN 1.00. The stock code is 17C and the specified by the applicant opening price for the first trading session is BGN 8.02 per share. By 13:00pm there had not been a single deal on the BSE.

Credissimo AD was created in 2007 and operates under the Credissimo brand. The company offers short-term credits. It has a license from the Bulgarian National Bank and is listed as a financial institution in the Commercial Register.

The company offers its products and generates 100% of its revenues in Bulgaria. It's the 5th largest consumer credit company. By the end of 2013, Credissimo had 40 employees.

“We are being listed on the exchange in 2014, during a difficult for the industry moment. It is important that we prove to be transparent and responsible, because this industry is based on social responsibility and trust.” said the company’s CEO Konstantin Krustev.

“The regulations won’t affect our business in a negative way.” said Mr. Krustev
“The high demand for such credits is a reason for our rapid growth since our inception. Therefore, we are expecting 3-digit growth in the next several years.” he added.

Mr. Krustev further explained that they are actively seeking ways to expand into new markets but did not give any more details. “The vision and business model of the company are created so that we reach our goals.”
“There is no decrease in customers after the regulations. From the statistics of BNB it is evident that this sector is not growing with a fast pace. For 2013, Credissimo achieved a 70% growth and it has continued to grow quickly during the first months of 2014. Bad debts amount to 16% which is below the industry average of 31%.”
“We welcome the regulations. The unethical companies must exit the market” said Krustev. He also pointed out that the share offering is the first step of a 3-year expansion strategy.

For the period 2010-2012 the company did not pay dividend, because it continuously reinvests its earnings into credit portfolio expansion. Krustev confirmed that the company would continue to reinvest its earnings.

For the same period, the net profit of Credissimo had a rapid growth and increasing margins mainly due to the low growth in operating expenses. The company used innovative technological solutions, whose business application reduced operating expenses and allowed for better use of economies of scale.